A Cemetery Narrative Panel, Voonith Concept Art and Animated Ghouls on the Attack

Sorry for the lack of updates on the game, but the team has collectively been rather busy with personal and professional challenges, and so we took a little bit more time than anticipated to pull together another update. Luckily, things seem to be back on track and work has continued at a steady pace for the past couple of weeks or so, including on the programming front. Here's a quick highlight of some of our latest work on the game.

First up, we have a new narrative panel by Sara, which should be about the third one in the level/demo we're putting together centered around "The Statement of Randolph Carter". As you can see, Sara has done a fantastic job incorporating elements from Wojciech's pixel art, especially the run down church previously featured on this blog. We anticipate that there will likely be another three to four panels sprinkled throughout the first level depicting Carter's journey. 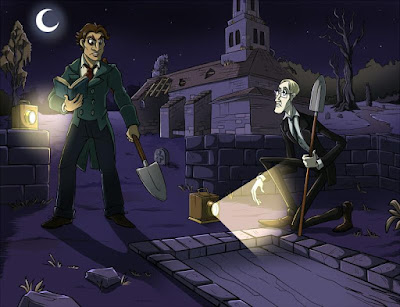 Next, we have a concept image from Luis of a creature featured much later in Lovecraft's original tale, a Voonith. From the original text: "And all through the night a voonith howled distantly from the shore of some hidden pool, but Carter felt no fear of that amphibious terror, since he had been told with certainty that not one of them dares even approach the slopes of Ngranek". As you can see, Luis took the minimal description of the creature from this passage and really played up the amphibious nature of it, making an image that is rather original compared to other visual interpretations out there. 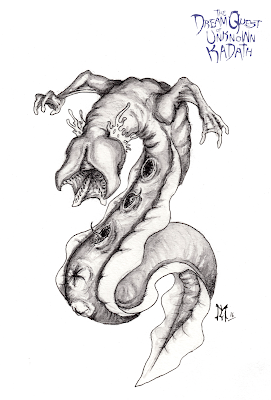 Finally, we have a couple of attack animations for the ghoul boss and bloodlust ghoul from Spyros. Most of these two characters' respective move sets have been rendered, and I have to say that Spyros did an outstanding job giving Luis' concepts a more three dimension aspect to them. They look both menacing and, when seen in context of the game, add to the creepy tone we're attempting to achieve. It's really going to be something when Kyle fully brings them into the game!

That's all for now, but as I mentioned, we're hard at work trying to make up for lost time. We expect sometime late fall to hopefully have some playable builds for people to try out in order to get feedback on the game. Thank you on the part of the entire team for continuing to follow our progress and keep checking this space!
Posted by Nate Wallace at 8:12 PM