Footage From the Latest Build and Various Concept Art

Sorry for the delayed post, but rest assured that our team is continuing steady progress on the game. Over the last week Kyle has been working hard on revamping the side view battle system and expanding the possible amount of characters in the party from 2 to 5. Along with those changes, he's improved the battle mechanics to allow for much more strategic game play, especially as the player progresses beyond the initial level. This build isn't quite ready yet (we expect to feature it in our next update), but to tide you over, here's a footage of the game which features a much-improved introduction and new mechanics, including Carter's ability to open sarcophagi.


Meanwhile, Luis produced a couple of new concept images for two creatures that will be featured in a later portion of the game, the Buopoth and Web-footed Wamp.  The Buopoth will be located in Kiran and the banks of Oukranos, while the Wamps will be found in various graveyards throughout the Dreamlands.  These characters have not been assigned behaviors or move sets yet, but we wanted you all to get a chance to check them out. 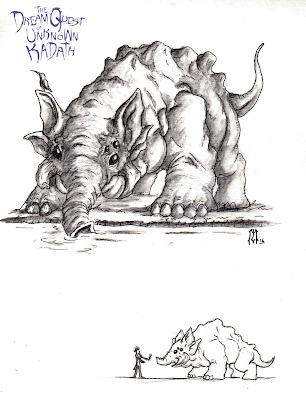 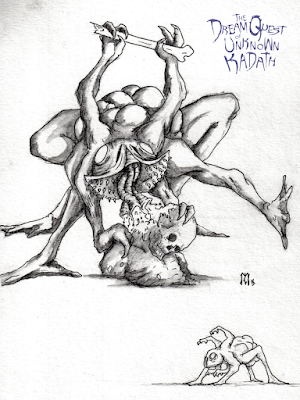 In further news, Sara has been working on a few narrative panels that will likely be incorporated into level 1-2.  As you can see below, this section of the game will trace the end of "The Statement of Randolph Carter", albeit with a few modifications to the narrative, such as the incorporation of a stray cat and the ghoul threat to give the game more of a sense of tension.

I've emphasized this before on the site, but we're planning on having a good variety of cats featured in the game, many of which can be traced to Ulthar in the Dreamlands, as featured in Lovecraft's story, "The Cats of Ulthar".  To this end Sara has come up with a few select designs for the cats, one of which, the cat in the center on the very bottom of the image, is the stray cat Warren and Carter encounter at the very beginning of level 1-1.  This stray cat is recruitable and can be brought into the player's party under certain conditions. 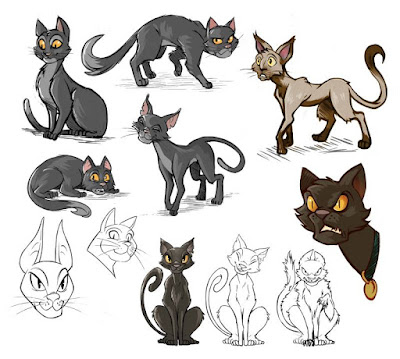 That's it for this week but be sure to keep your eyes on this space for further updates, hopefully fairly soon.  Mateo recently recorded themes for the pause menu and victories in the side battle view that we hope to port into the game in the next build.  Thank you for your interest in our project!
Posted by Nate Wallace at 9:41 PM