A Narrative Illustration by Sara Bardi and Battle Theme by Mateo

Hello all!  This won't be an overly long post this week but I wanted to show off a couple of major additions to the game from our team.  First, we have Sara's final version of the first narrative panel that will be featured in the introduction to level 1-1.  Each layer of the image can easily be divided from the rest of the composition, so there's a good possibility that we'll be able to somewhat move the individual elements around while the text is displayed at the very bottom of the screen.  Essentially these narrative panels will offer up an exclamation point in terms of major story points, and this image marks the end of a prelude to the level, which focuses on why Warren and Carter have ventured to the Big Cypress Cemetery this evening and what they hope to discover while they're here. 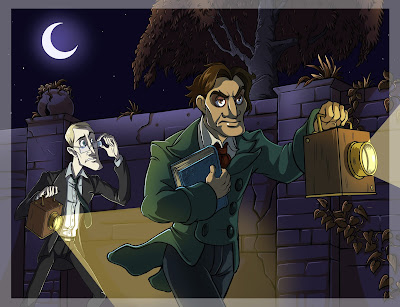 Sara has also came up with a game over screen concept sequence (seen below) that might end up being animated, if circumstances permit.  Likely this animation will transition from the first screen, to the second, and then the perspective will focus in on the key breaking as represented in image four.  The concept is definitely not completely developed but I quite like where it's headed so far. 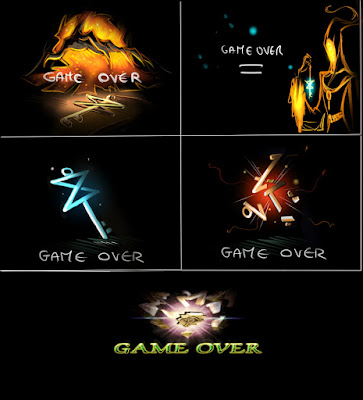 The other major addition to the game we wanted people to check out this week is a battle theme Mateo came up with that will be used during side view combat with minor enemies.  As you can hear, the tempo is a bit higher from the level's main theme in order to make the player feel more in peril.  This theme will be repeated until the battle has an outcome, either positive or negative, so you might keep playing the song over and over to get a good sense of what it will be like.  We hope to post a video soon of the latest build with this song included in the game.

That's it for now, but keep your eyes on this space for more images, sounds and footage in the coming weeks.