This week we have a few images to show you by Sara and Luis, and our crew here lists their top 5 horror texts, just in time for Halloween.

First, Sara has made very two very impressive character icons for the pause menu for both Warren and Carter that you can see in the last post (just below this one).  These have already been placed into the game by Kyle and will show up in our next video of actual footage from it.

Additionally, this week we have another creepy concept image from Luis of the Hound, a ghoul-like four-footed and winged creature who is summoned by a sorcerer ghoul at the end of stage 1-3.  We'll find out more about how this character fits into the level's design towards the end of our work on this level. 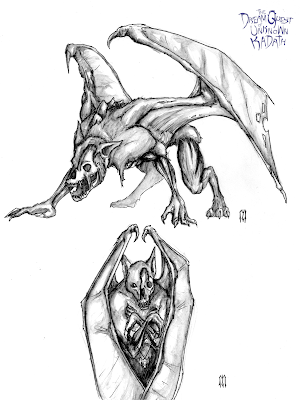 Finally, we thought that it might be fun for the team to each list their favorite top 5 horror related texts (books, games, movies, etc) for Halloween.  Please feel free to chime in with your own or agree/disagree with ours in the comments section.

1) The Secret World (Funcom) a story-driven horror MMO about legends and folklore set in present day. Each year, the developers host awesome Halloween events, introducing new dungeons, characters and skills. The game has a very strong Lovecraftian atmosphere and is filled with classic horror movies references.
2) Monster Squad (1987) - a light-hearted Halloween adventure about a group of kids hunting monsters.
3) Tim Burton's Sleepy Hollow (1999) Oh, c'mon. It's a classic! It was the very first gory movie I ever saw and is still one of my faves.
4) Tanz der Vampire (currently on tour, premiered in 1997) - now it's time for some European pride :D 'Tanz der Vampire' (Dance of the Vampires) is a German musical that portrays the infamous black-caped bloodsuckers as the cruel, manipulative monsters they're supposed to be. It's a spectacular show that mixes 'Phantom of the Opera' 's flamboyance with the supernatural. English subtitles available!
5) Poems Bewitched and Haunted - (Everyman's Library Pocket Poets) (various authors, including Homer, Shakespeare, Yeats, Torquato Tasso, Baudelaire and many others. A great selection, perfect to be read aloud in a dimly-lighted room.)

Movies:
1) Hellraiser (1987): Beautiful character design and SM contraptions give all cenobites an awesome and unique taste. Also, the more chains the better right?
2) Hellraiser 2 (1988): Though slightly inferior to it's predecessor, the new cenobite design and improved effects do add to the awesome feeling of extreme pain and pleasure!
3) Mama (2013): Incredible story and beautiful soundtrack, I like to think of it as a dark fantasy movie rather than a horror pic. The only bummer for me was Mama's actual design.
4) Alien Resurrection (1997): Gotta include some horror sci-fi right? I personally love this movie, and it sure was unbearable to watch when I was younger, specially the ending part. As always, xenomorph design is impecable
5) Nightbreed (1990): Clive Barker on 3/5 movies in my list? Well believe it because he is a truly awesome writer/designer. Though I really like the movie's thematic and monster design, I felt like post-production chopped it out to pieces and reassembled everything. I can't wait to see the infamous director's cut that was recently rescued and published!

Bonus - Videogames!
To me horror games have reinvented the horror market, and it is them that have shaped me as a horror artist rather than movies. So here they are, my top 5 Horror videogames of all time:

1) The Suffering: I cannot begin to describe this game, as it feels like it answered to my every call regarding enemy design and horrific scenarios. If you have a chance to play it, do it.
2) Resident Evil 3: Nemesis : Awesome and creepy game, really the best in the RE series. Sure gave me endless nights of terror when I was a kid.
3) Silent Hill 4: The Room: Brutal Japanese horror game that lets you soak in your own fear before bashing you with cool enemies. The only down side to me is combat, as I doubt many people would just beat a baby-faced horror in an unknown dimension with a pipe without losing some sanity!
4) Amnesia: Even on a low budget, modern games can be scary. Amnesia gives the kind of horror I really respect: True psychological terror that does not need cheap scares to keep your shorts wet.
5) Outlast: Though I'm not a fan of their character design, I think that forcing you to experience the game through a camera is freaky enough to grant a scare or two.

1) Videogame: The first resident evil game for PS ONE, to be honest, maybe it wasn't even that scary but for the time when it was released, it really could scare the hell out of you.
2) Horror film: [Rec] (2007) (the spanish one). sharing place with Grave encounters, (which, I don't happen to consider it horror perse, but, the argument and concept is quiet nice).
3) Videogame: Amnesia the dark descent, Awesome game.
4) Movie: The Exorcist (1973).  one hell of a classic
5) Story: There's one 'creepypasta' where it talks about selling ''lolita dolls' which are, girls who are given in adoption that no one adopts, they then are chopped off their limbs (arms up to elbow, and legs up to knees, and then placed some kind of screws so you can screw your doll whereever you want), taken of their teeths, and filled the mouth with silicone. they blind them and live them deaf, so, they then are sold as sex life toys.  reaaaaally a f*cked up story.

1) Silent Hill Series - If I didn't put this here most of my list would be Silent hill games.
2) The Cabin in the Woods (2012) - Movie was brilliant. If you have not seen it go watch it.
3) 28 Days Later (2002) - I loved this movie. My favorite part was the lack of horror honestly. Just some people chilling in an apocalyptic situation. It was something pretty surreal to me.
4) Shaun of the Dead (2004) - I watched this movie far too much. Felt it would be a lie to put something else here.
5) Dracula 3000 (2004) - My joke entry. Have you watched it? No? You have not missed anything.

1)  Hellraiser II:  Hellbound (1988) – I’ll never forget first watching this in high school in my bedroom with my two buddies and one of them was so grossed out by it that he almost got sick.  Beyond the purely visceral response you might have up first viewing it, Hellraiser II’s use of labyrinths and surrealistic juxtapositions between reality and horror collide to make a very captivating experience.
2)  Castlevania III:  Dracula’s Curse – I admit that I have never beaten Castlevania III to this day, however, that I still enjoy firing it up and playing it is a testament to the pure fun the game evokes.  With the player’s ability to switch characters and use dramatically different skill sets, the replay value of the game is rather high.  Additionally, the music and visuals in the game are exceptional and are way beyond what you might find in other games released on the NES during this era.
3)  Black Easter by James Blish – Though quite a few people know James Blish for writing Star Trek novels, Black Easter, his first novella of an intended trilogy of related books really shines for the horror it evokes.  The protagonist of the story, a bored and overly wealthy elite defense contractor, finds himself discontented with the chaos and violence he creates in his current position.  Seeking to go beyond, the contractor commissions a black magician to summon demons in the service of his aims.  Once he becomes aware of the possibilities of this new avenue of terror, the defense contractor demands that the black magician unleash an army of demons from hell, tempting the advent of Armageddon in the process.
4)  Videodrome (1983) by David Cronenberg – I would consider Videodrome the most exceptional example of Cronenberg’s body horror genre of films (The Fly is a close second).  The way the film connects electronic media and the human body really challenges the viewer to ask the question:  Are we real or are we simply products of the media we consume?  The answer to this is perhaps the true horror of the film.
5)  Dark Souls – The much lauded difficulty of Dark Souls often overshadows the incredible scope of landscape and architecture of the game’s environment and the truly bizarre visual nature of the creatures that populate it.  A sense of dread is constantly evoked and maintained throughout the game, despite the rogue-like mechanics that underpin the gameplay.  If you haven’t played this yet, you owe it to yourself to give it a try.