This week we have Luis' Cat of Saturn concept image for your consideration.  Instead of having me introduce it, I thought that I would include a little blurb he wrote up regarding this strange beast.  Here's Luis' description of how this lunar feline might conduct itself in the game:

During game play the Cat of Saturn would be able to jump through dimensions and use different body parts to attack Carter from multiple angles. This method of attack could be used by the creature in the top-down map as a way to stalk Carter from afar and to avoid damage; leaving its tail as bait or dummy. During side battles, the Cat of Saturn could blink out for a turn, leaving its tail as anchor, and blink-attack the next turn.  Through this method of attack, Carter and his cat allies can attack the tail on the first turn, delivering a small amount of damage, and would receive a highly effective attack the next turn. The down-side to these creatures would be their ridiculously low health or vulnerability to being bound to this dimension by an item, thus making it impossible to avoid a full blow. 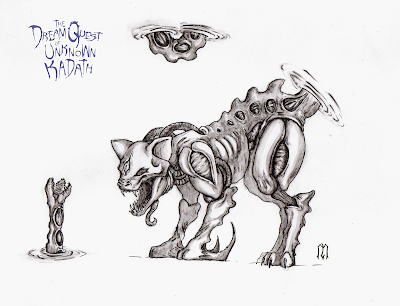 As you can see from the drawing and Luis' detailed explanation of its abilities, this enemy character offers quite a few distinctive challenges for Carter on the moon level of Dream-Quest.

Finally, I wanted to let you in on some recent news regarding our attempt to secure a musician to score the game.  Luis reached out to his friend Mateo Galarza, a musician in Ecuador, to do just that and he has thankfully agreed to help create music and sounds for our initial demo.  From what I've heard so far, I think that his style of music will fit in perfectly with our vision of the game, and I hope to post something the minute Mateo has completed the initial Dream-Quest theme.  Until next time!
Posted by Nate Wallace at 7:45 PM