We've got a slew of images to show you this week, so let's get right to it.

First we have a concept image of the turn-based battle screen that we're working on including in the game.  This screen will be triggered by the player when an enemy is within a certain range of the player's character and a button is pressed on the gamepad (we're still trying to figure out which one!).  One of the things that you'll noticed about this image is that Carter is equipped with a shovel and Warren is equipped with the light.  During a side-view fight sequence, the player may swap out a shovel for a lantern at any time with both characters, however, there will be repercussions in terms of their stats depending on which character is holding which item.  For instance, if both characters are equipped with shovels, they'll do more damage to the enemy, while at the same time, they'll have a lesser chance of actually landing their attacks because of the lack of light.  On the other hand, if one character holds the lantern pointed at the enemy, this can essentially blind them and make it harder to land their attacks against your party.  Additionally, the character holding a lantern can do a limited attack of kick, that deals much less damage than a shovel attack.  The Equip command allows the player to change the equipment that the player is utilizing once it is their turn, depending on what items are in the player's inventory. 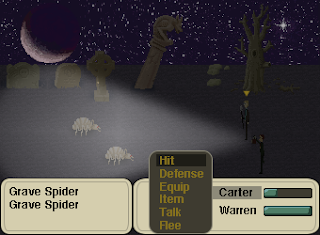 Pixel Art by Nate Wallace, Sara Bardi, and Wojciech Witowski.  The Grave Spider is based on character art by Luis Merlo.

Moving on, this week Luis contributed a concept image of the Grotesque Fungus, an enemy that resides in the Enchanted Forest, Level 4 of the game.  We hope to populate the area with plenty of strange plants and animals to help make the environment more bizarre and threatening.

To finish off our post, we have some more incredible pixel art by Wojciech Witowski.

Borrowing from Lovecraft's short story, "The Outsider", again, we're adding the "ancient stone church, whose ruined spire gleamed spectrally in the moonlight" to this first level, along with another gargoyle from Notre Dame to keep guard on its roof. 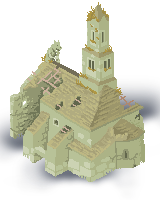 Below you'll notice three types of different crypts that will be stationed throughout the cemetery level.  Once the ghouls begin to pursue Carter after leaving Warren to his fate underground, the player will need to seek out safe harbor by breaking into these buildings, entering them and barring the door on the inside.  The ghouls will attempt to break in, but because of the solid walls and sturdy doors, Carter will find temporary protection from their attacks.  Eventually, any surrounding ghouls around these crypts will lose interest in Carter and move on to another portion of the cemetery.  Carter will need to stealthily move from one crypt to another as he escapes from the cemetery to the front entrance.

Finally we have a night sky, which will be featured in the side-view battle scenes in this level, as well as in the beginning when Warren and Carter break into the cemetery's entrance.

That's all for now!  Stay tuned to this spot for continuing progress reports on the game and look for Sara Bardi and myself at the NecronomiCon in Providence, Friday August 21st through the 23rd.