An Image for Through the Gates of the Silver Key, a potential sequel to Dream-Quest

This week we feature an image by Ramiro R. of E. Hoffmann Price and H.P. Lovecraft's short story "Through the Gates of the Silver Key" that, though very premature, hints at some of the discussions the team has had about a potential sequel to Dream-Quest down the line. The idea behind such a game is to connect "The Silver Key" with "Through the Gates of the Silver Key" and lead off the narrative with Lovecraft's short story, "The Unnameable" (yeah, kind of out of order).  The highlight of the game, at least for me, is the potential to control Zkauba the wizard insect of Yaddath as it travels to Shonhi, Mthura and Kath looking for the means to separate its body from Randolph Carter's consciousness.  Obviously, this is pretty far down the road, but I couldn't resist in my excitement for the recent NecronomiCon in Providence tapping into Ramiro to see what he could come up.   I think that you'll all agree that he did a rather fantastic job capturing all of the trippy psychedelic overtones of the story! 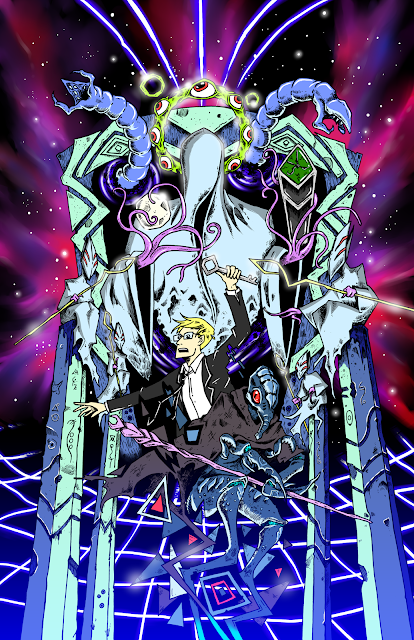 Ramiro R. - Through the Gates of the Silver Key

That's all for now but be on the look out for Louis' concept art for the Cat of Saturn to be posted soon.
Posted by Nate Wallace at 9:11 PM