Happy Monday, everyone!  Today we'll show you a couple of new pixel works by Wojciech, including a set of columns and, most importantly, the "certain half-obliterated sepulchre" where the climax of "The Statement of Randolph Carter" takes place.

One of our intentions in putting this game together is to bring sometimes disparate elements of Lovecraft's fictional metaverse together, and in keeping with that, we have chosen to incorporate the columns and church into this level that are mentioned in "The Outsider" in the following passage "ancient stone church, whose ruined spire gleamed spectrally in the moonlight". Our view is that the vertical passage referenced in "The Outsider" and in "The Statement of Randolph Carter" are very similar, and that indeed there are many such passages in existence that connect the Wake World to the Dreamlands.  This won't necessarily be the exact passage referenced in "The Outsider" (we're saving that one for later) but it will have certain similarities, such as the presence of these columns and a ruined church (to be created later).

The second major image we'd like to share is that of the sepulchre where the titular scene from "The Statement of Randolph Carter" takes place.  Upon discovering it, Carter and Warren will lay down their lanterns and pry the three marble slabs off the entrance using their shovels.  At that point, just as in the story, Warren will descend this treacherous passage holding an electric portable telephone. 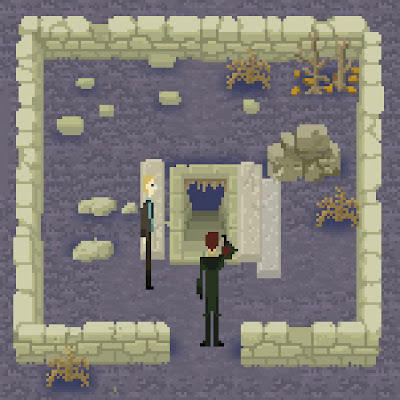 After the events of "The Statement..." occur, Carter will be left alone by the sepulchre, and will look around the cemetery to discover the ascension (see Luis' previous drawings of this sequence) of ghouls from the underworld, seeking to prevent his entrance into this subterranean passage.

Finally, here's some animation I made of Carter placing his lantern on the ground.  This will be an action that the player will be permitted to do in this level and the advantages to doing so include the ability to have a light shining while Carter wields his shovel.  It's still a mechanic that we're working on but at least the animation for it has been created.

That's all for now.  Stay tuned to this page and our Facebook page for further developments.
Posted by Nate Wallace at 9:57 PM