We've got some new pixel art to show you this week, so without delay, let's get right to it!

Sara has adapted some of Luis' concept sketches into pixel art, specifically the Bloodlust Ghoul and the standard warrior Ghoul. 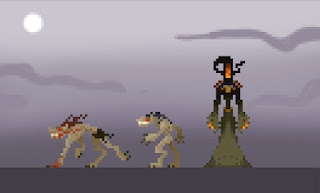 Pixel Art of the Bloodlust Ghoul, Ghoul, and Nyarlathotep by Sara Bardi


What would the Big Cypress cemetery be without cypress trees?  Wojciech has created a few to populate the level.  We would like to eventually have spiders hanging off of them that lower themselves slowly on a strand of web to the ground. 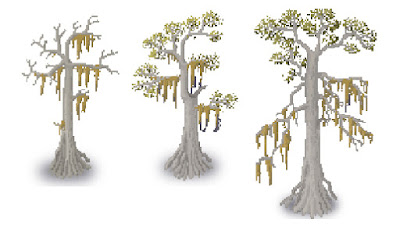 Those who have frequented the cathedral of Notre Dame or are enmeshed in Art History or Architecture might recognize the gargoyles featured in this last selection of pixel art. Lovecraft mentioned them in the story, "Pickman's Model" in the following passage:

And before Goya you have to go back to the mediaeval chaps who did the gargoyles and chimaeras on Notre Dame and Mont Saint-Michel. They believed all sorts of things—and maybe they saw all sorts of things, too, for the Middle Ages had some curious phases.


Besides the gargoyles there are other real world references we've placed in the game.  For instance, the white angel on the very left is based on a sculpture located in the West State Street Cemetery in my adopted hometown of Athens, OH.  We're hoping to put little easter eggs like these into the game whenever possible, especially if they don't change the context of the narrative. 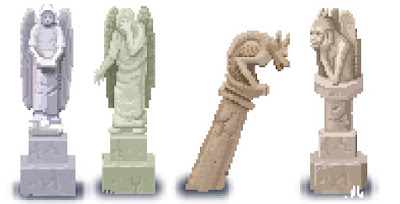 That's it for this week, but just to put the word out, we're still behind on the programming side of the game. If you know of any Game Maker programmers who are into Lovecraft and who might be interested in assisting us, please send them our way at diemath@gmail.com.  There's no money involved in the project at this point but once we get our Kickstarter off the ground, hopefully in six months, we'll be able to pay everyone for their future work.
Posted by Nate Wallace at 9:07 PM