Dialogue Art, Disguised Creatures in the Wakeworld and Digging Animation

There will be a dialogue system in the game, as demonstrated in some of the earlier game footage. Having said that, the exact detail regarding the dimensions of these images, whether we go with something more pixelated or in high definition, is still up in the air. One example of a dialogue system that we are leaning towards, Persona 3, has fairly clean dialogue image art while the actual in-game graphics are somewhat pixelated in aspect. The main issue that we're having now is bringing the two types of graphics together in a cohesive manner that doesn't appear too distracting. Regardless of what we ultimately decide to do, you can see Sara's dialogue art for Randolph Carter below. 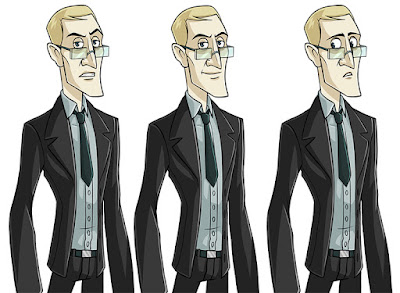 Though we are going to try and keep the Wake World fairly realistic in terms of enemies in the beginning, with the exception of the ghoul exiles, the Dreamlands will begin to bleed into reality at some point and creatures originating from there will increasingly invade humanity's reality.  To this end, Luis has designed a Maggot Creature that is disguised as a human. Ideally, humans and these creatures will walk side-by-side together down the alleys of Boston, posing some confusion to the player as to what heavily clothed figure to attack or flee and what figure to view with indifference. 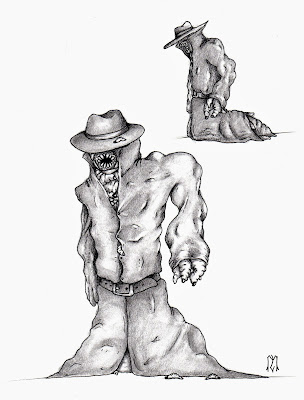 Finally, I made a side view animation of Randolph Carter using his shovel on the ground, a mechanic that will be incorporated into this level at some point.  By digging in certain areas of the Big Cypress Cemetery, Carter will find both challenging perils, in the form of formerly buried certain creatures, and invaluable assets that will help him complete the level.

That's all for now, have a great week!
Posted by Nate Wallace at 9:04 PM