We have but one image to show you this week, but it's a pretty awesome one. Below you'll find Luis' concept art of a ghoul sabbath that Carter encounters after fleeing the ruined sepulchre he last observed Warren descend into within the story "The Statement of Randolph Carter".  As the player learns in the game, the ghouls Carter comes upon in Big Cypress Cemetery are exiles from the Dreamlands who wish to summon the crawling chaos, Nyarlathotep into the Wake World. 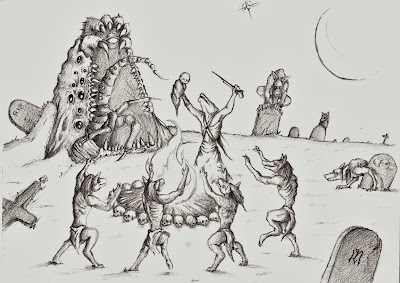 The ritual these ghouls commit is ultimately successful, and Nyarlanthotep's mere presence in the Wake World lessens the divide between it and the Dreamlands, making it easier to cross over from one area to the next.  Once Carter returns to Boston after his questioning by the police, this lessening of the boundaries of reality isn't readily apparent.  However, upon dreaming about the sunset city, Carter realizes that these boundaries can be crossed and he resolves to do so in order to discover what happened to his friend Warren and experience this splendid city of the gods for himself.
Posted by Nate Wallace at 7:58 PM