The Bloodlust Ghoul and Cultist of the Flame Ghoul

This week we have a couple of new concept images by Luis to show you. First, here's a Bloodlust Ghoul that will be among the first creatures that arise from the "half-obliterated sepulchre" at the center of the Big Cypress Cemetery, after the climax of "The Statement of Randolph Carter" occurs. 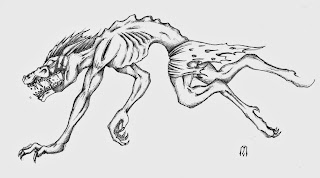 The Bloodlust Ghoul, starving for sustenance, has lower health than the typical ghoul, however, driven by its desperation to eat, it runs much faster and is fairly unpredictable.  Carter will need to respond quickly to its approach by crouching behind tombstones, climbing on top of them or breaking in and hiding in abandoned crypts in order to avoid this dangerous enemy.

Luis' second concept image this week is of a Ghoul Cultist of the Flame who inhabits the Cavern of Flame (Level 3) that Carter must pass through in order to enter into the Dreamlands.  We decided to include ghouls in the cavern since in H.P. Lovecraft's poem, Nemesis, he mentions the passage “Through the ghoul-guarded gateways of slumber”.  The Cavern of Flame is very dark, and Carter will need to use a lantern in order to navigate his way through the portions of the level that are not lit up by the endlessly-flowing lava. 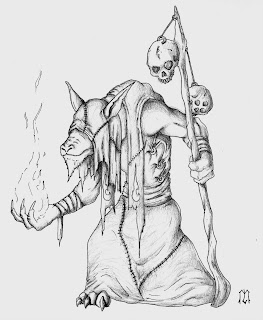 Though the Ghoul Cultist of the Flame is blind, it has the ability to sense its enemies, and like its name suggests, attacks the player with fire magic.  The ghouls in the Cavern of Flame, including the Cultist, worship a mysterious fire deity and gain their immense power through contact with it.

Finally, here's a short video of the actual game demonstrating the lantern and jump ability.  The player can now select Carter's lantern and, using the controller, direct the light to shine in 360 degrees to help aid them through the level.  Additionally, the player now has the ability to jump, which, at some point, will translate into permitting the player to climb gravestones to get out of the enemy's reach.