Sorry for the delay, folks, but the team has been rather busy within the past couple of weeks with their individual personal and professional lives.  Having said that, we're back on track and hope to make some substantial progress on the game in the coming weeks.  First off, we have a concept image from Luis illustrating a group of Level 2 Boston enemies, a plague of rats.  These rats will, like the feral dogs, inhabit the periphery of the Wake World, such as in alleys and sewers.  One bite from these disease-ridden rodents will result in poisoning Carter, so it's imperative that the player keep a good distance from them, or equip the necessary remedies to recover quickly if attacked. 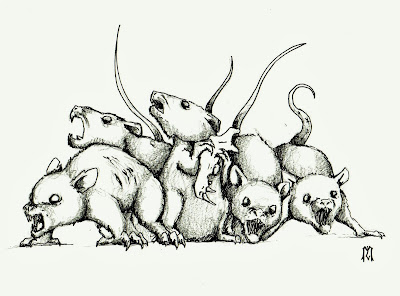 Turning our discussion to development of the game in Game Maker, over the past week we have incorporated a lighting system into the first level, with the burden of carrying the electric lantern resting on Carter's companion, Harley Warren.  Eventually we want Carter himself to have the ability to switch between using the shovel, lantern or to remain unequipped (granting certain speed and stamina bonuses), but this will not be possible until an inventory system is established, which we hope to implement in the game within the next couple of weeks.  As a reminder, the beginning of Level 1 revolves around Carter and Warren's attempt to discover the whereabouts of a mysterious sepulchre in a southern graveyard. In order to get to this sought-after location, the player will need to fight off spiders and bats, as Warren trails his companion holding an electric lantern to light the way.


That's all we have for this week, however, it's important to note that we're still in need of a concept artist to draw environments, both architecture and landscapes, a sound/sound effects composer, and a Game Maker programmer.  If interested, please get a hold of us via the emails listed under the contacts link at the top of the page.