Bat and Spider Pixel Art, A Ghoul Rising Up from the Ground and Recent Gameplay Footage.

Hey all!  We have a ton of progress to show off this week, so without further ado, here's Wojciech's pixel adaptations of Luis' spider and bat concept art. 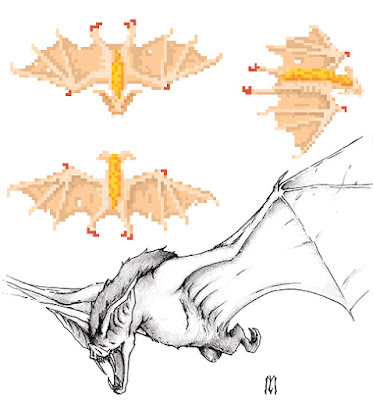 These are static images at this point, but hopefully in the not too distant future we'll try and animate them to reflect these creatures' movement and attacks. 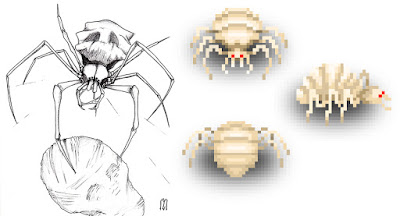 Next, here's Luis' sequential concept image of a ghoul reaching out of a grave in Big Cypress Cemetery.  We're hoping to use it as a model to help us create animation for the ghouls at some point.  Its context is that once the climax at the end of "The Statement of Randolph Carter" takes place, Warren will need to escape from the graveyard.  Blocking his way out will be an army of ghouls intent on getting back the Necronomicon, some of whom will claw their way up from the ground like the ghoul pictured here. 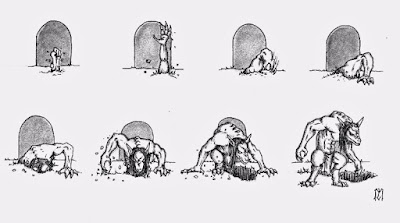 Finally, I wanted to post a video of the progress we've recently made in the game. You'll notice that we placed many of Wojciech's pixel assets into the level, as well as a few static images of the spider for good measure. We also managed to implement states in Game Maker, and as of now, Carter has the ability to switch from not holding anything (giving him faster speed and the ability to jump) to a shovel (to attack with) or a lamp (which he will eventually be able to direct and shine like Warren once we figure out the code to do so).  If you look on the bottom right, there is a small graphic that indicates which state Carter is in that changes every time the state is switched by the player via the gamepad.  The HUD you see here is by no means final, however, you get a general sense about how the game will eventually be played.