This will be a very short post this week but we are making substantial progress on the mechanics of the game in Game Maker and it's definitely worth sharing.  Presently Carter can run around the graveyard with his fellow explorer Harley Warren in tow during the beginning portion of Level 1.  Eventually we hope to give an electric lantern to Warren in order to light the dark corners of the first level and allow the player to see and attack their enemies.  Additionally, you'll note from the video that the player can press a button to trigger additional stamina, resulting in a burst of speed until the upper left circular gauge has been exhausted.  The design of this meter is still being worked on and no final decision has been made as to what it will actually look like but at least you can get a feel for what we're trying to do with the game's mechanics.

In other developments, Luis continues to churn out fantastic concept art for the creatures populating the first few levels of the game.  This week, he has submitted an image of a feral dog that will lurk, likely in packs, in the treacherous alleyways of the second level of the Wake World, Boston (and the real beginning of the novella, The Dream-Quest of Unknown Kaddath). 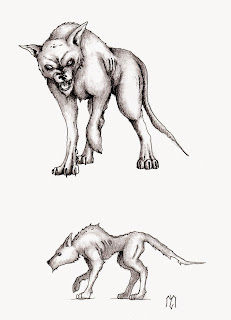 Have a great rest of the week and keep checking on this site for further updates!