A New Concept Image, Carter Swings His Shovel & An Interview With Sara

For this week's update, I wanted to first post a new concept image of an alligator by Luis that will lurk in the periphery of the swamp in the game's Level 1 southern graveyard.  We hope to include a couple of these hulking reptiles to serve as potential obstacles for the player to avoid.  Significantly, they are not an enemy that you could necessarily “beat,” rather they attack and kill Carter if the player ventures too close to the swamp's edge. 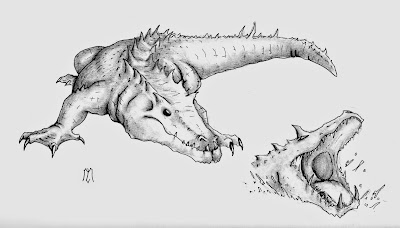 In other news, my efforts to port some of the pixel art and animation into Game Maker have met with some limited success as can be seen in the short YouTube clip below.  I've changed Carter's side view running animation to reflect the new revised look, based on Sara's comments, and have included the ability for the player to press A on an Xbox controller in order to utilize the shovel to attack this level's enemies.  Additionally, I've fixed the ghouls' coding so they now turn toward whichever direction Carter is located relative to their own position.

Finally, if you didn't get an opportunity to already check it out, Sara recently did an interview with the crew behind the Cthulhu Project to answer a few questions about her Lovely Lovecraft webcomic and her involvement with our The Dream-Quest of Unknown Kadath video game adaptation.  It's a very entertaining and informative read, so head on over to learn more about one of our key contributors.
Posted by Nate Wallace at 4:59 AM